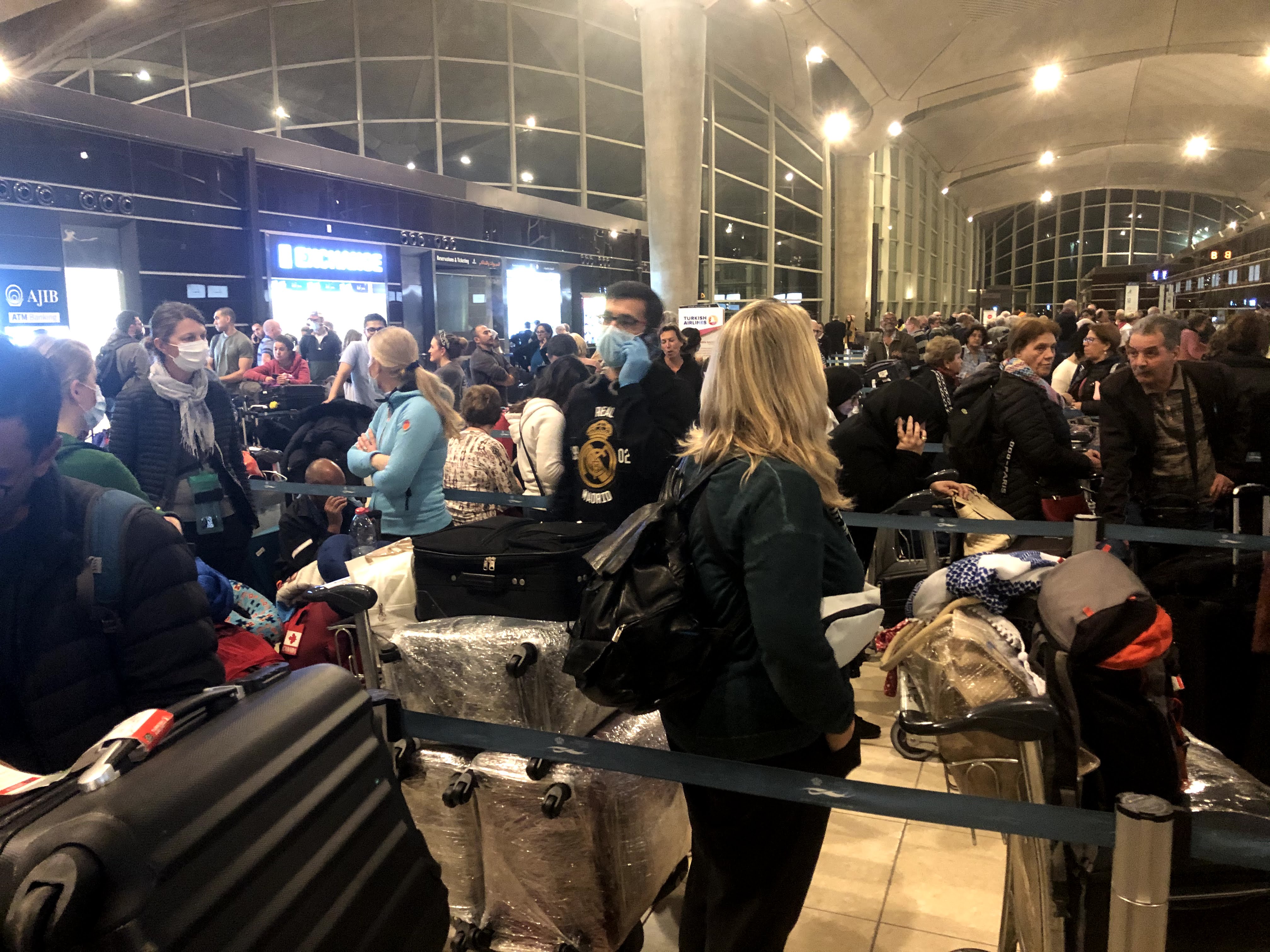 Confusion set in when the Jordanian government announced that the airports were closing.

We learned it on a Saturday afternoon - the airports were going to close at 12:00 a.m. Tuesday morning. We tried to make phone calls to reach the airlines but that was unsuccessful. It seemed that our best option for getting home was to go directly to the airport and speak to someone face to face.

Getting to the airport was not the hard part, though. Finding someone that could help us was the real challenge. We went from one office to another, each one pointing us somewhere else. Since our airline wasn't scheduled to fly again until much later in the evening, the best advice was to come back, around 11:00 p.m. when the counters would open.

Thinking that there might be a crowd, we came back to the airport at 10:30, but others thought the same thing and the lines were already 10 deep. It turns out that the counters didn't open until 11:30 and by then there were hundreds of people in line, many of whom, like myself, didn't have a ticket until later in the week. In other words, we were not a priority, but still we waited.

Finally the line started to move and after another 30 minutes or so we got to the front, only to be told that we were in the wrong line. ... Frustrating might be a good word to use at this point but it was only the beginning. We then moved to another line and when we eventually got to the counter we were told that they couldn't help us. The flights leading up to the deadline were all full.

As this experience progressed, there were moments when, even as a Christian, I felt in competition with the crowd and wanted my needs to be met ahead of others. We all had a similar need, but there was a clear lack of any leader who had the capacity to help everyone or even the authority to guide the process.

For me it was a modern parable about our need for a shepherd powerful enough and compassionate enough to help any and all without making distinctions and without leaving anyone behind.

Matthew 9:35-36
Jesus went through all the towns and villages, teaching in their synagogues, preaching the good news of the kingdom and healing every disease and sickness. When he saw the crowds, he had compassion on them, because they were harassed and helpless, like sheep without a shepherd.

Learning from Jesus together with you,

Thanks Pastor mike for your insight. This lesson is a reminder that when we experience helplessness and confusion or the fear of unknown as it is the case right now with Coronavirus pandemic situation, we have the privilege to carry everything to God in prayer. In everything present your request to God -Philippians 4:6. Have a wonderful time in Jordan. We miss you.

We are definitely sheep in need of a shepherd. Your message was so timely. I pray for you and Carol's safe return soon.

Where had you been. When you needed to fly into Jordan?

More in Lessons from Jordan